Indonesia is a big, versatile and beautiful country with more than 17.000 island, which are spread over 5000 km of the tropical, equatorial ocean. With it’s position in between Asia and Australia, Indonesia is the biggest archipelago of the world. The main islands are Bali, Kalimantan, Sulawesi and Westpapua.
If your would put a map of Indonesia on top of a map of Europe, Indonesia would spread from London to Moskow and from Ireland to the Caspian Sea. On this range of land and sea there are hundreds of volcanoes smoldering, which created a rich vegetation on the islands. Green rice terraces the smoking mountains and bright white beaches blend in the blue sea. Huge rainforests and dense mangroves protect the country’s impressive flora and fauna.
Today Indonesia with a population of approximately 210 millions of people is the country with the forth most population in the world. The country is a home for over 300 ethnicities. There are hundreds of different languages and dialects. This diversity is the result of Indonesia’s history and it’s geographical position. Over more than 2000 years, it was always close to the main international trading routes. All major religions and cultures influenced the archipelago.
The diving spots in Indonesia are among the best you can experience under water. Uncountable numbers of reefs and richness in species are waiting for divers. Furthermore every region has it’s own attraction and it’s endemic animal and fishspecies, which you can explore. A lot of spots are far away so you actually do some pioneer work and unique experiences off the mass tourism are guaranteed.
The national motto of Indonesia is: „Bhinneka Tunggal Ika“, which means “entity is diversity” and this is valid above and under water.

A fantastic nature as well as a familial atmosphere are provided by the exotic Resort, a little paradise that has been constructed adapted to the nature. 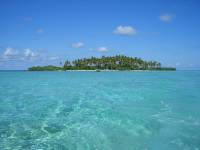 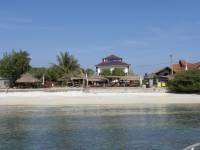 The beautiful Dream Divers Bungalows are located on the grounds of the Dream Divers diving base on the lively island of Gili Trawangan. From the rooms to the restaurants and the beautiful beach is only a few meters.

Diving and Yoga Resort
The Virgin Cocoa Island is a paradise for divers, snorkelers and yogis. Yoga lessons takes place saisonal. The island is connected via a boat shuttle service to the neighbour island of Nunukan.

Newly opened diving resort under Swiss management far away from tourist paths. The Moluccas or "Spice Islands" lie between Sulawesi and New Guinea.