Solo diver looking for a buddy?

Who has a lot to do with solo divers knows well, that they are often shy contemporaries, hiding quickly, as soon as they see another diver . Some people may even call them unsociable.

But once again, Extra Divers Sharm El Naga proved its uniqueness: over here, Michael (at the right on the picture), Riad (at the left on the picture) and Ralph ( very shy, so out of the picture) found each other! Already for the 4th and 5th time they are staying at the Viva Blue Hotel, to go for “solo diving” at Extra Divers Sharm el Naga!
Maybe this happens due to the deep relaxing in the bay of the little camel? Or maybe it is the harmony, spread by the residential couple of eagles?
Nobody knows it exactely, but the magic of Sharm el Naga effects everybody! So when are you going to be enchated?

Robert, Marisa and their team are waiting for you, already 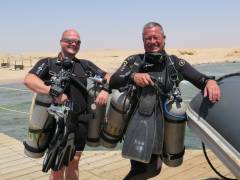