The wreck of City of Winchester in Oman

The City of Winchester, the first shipwreck of World War I, was closed off by the Omani government in recent years and was not allowed to be dived.
After long negotiations, however, this has now changed: Exclusively and only for the guests of our Oman Explorer.
From this New Year's Eve trip the wreck, which lies at a depth of 30m, can be approached and explored by us!

On the way home on her maiden voyage, the City of Winchester was sunk by the German Navy during the First World War on the evening of August 12, 1914.
The crew of the 6,608-ton colossus was allowed to leave, but the cargo, consisting of tea and antlers, was sunk together with the almost 140m long steamer and lay until 1986 completely undisturbed on the seabed!
A few divers of the only civilian diving club in Oman then "stumbled" over the unknown ship. The wreck was finally identified in the late 1990s by British amateur diver Steve Dover during a dive near the Hallaniyat Islands off the east coast of Oman.

As the only liveaboard, Extra Divers are now allowed to dive the wreck with their Oman Explorer - and that should guarantee many exciting dives:
In addition to masses of fish and the associated predators, large and small groupers, huge barracuda and sheer endless mackerel swarms, the wreck itself probably offers some sensational surprises. Over the years, the artificially created reef is full of life and Steve Dover noted 20 years ago that the City of Winchester would like to be visited again and again by dolphins and also by the local population of humpback whales!

The wreck of City of Winchester in Oman, weiterführende Informationen

Bilder: The wreck of City of Winchester in Oman 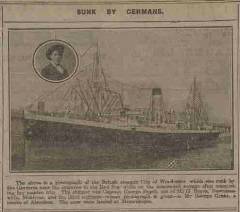